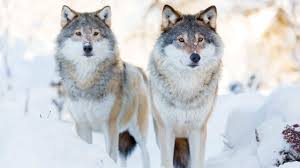 Canis priscolatrans lived in the late Pliocene-Early Pleistocene in North America. The first definite wolf appeared in the Late Blancan/Early Irvingtonian, and named C. priscolatrans that was either very close to or a synonym for Canis edwardii. The original theory was that all dogs descended from a single ancestor, the gray wolf (Canis lupus), but modern genetic testing and DNA analysis has determined that it is more likely that an even more ancient ancestor such as the extinct Taymyr wolf or other extinct wolves were the original ancestors of all dogs. Arctic wolves are thought to have evolved from a lineage of other canids about 50 million years ago. Scientists believe that Arctic wolves were isolated in very cold habitats during the Ice Age. It was during this time that they developed the adaptations necessary to survive in the extreme cold of the Arctic. The black fur of some North American wolves is the result of long-ago dalliances with domestic dogs, probably the companions of the earliest Native Americans. And a black coat seems to provide an advantage to forest-dwelling wolves, meaning dogs passed on some useful genetic diversity to their wild cousins.